What stage are we at?

At its meeting on 19th June 2019, Milton Keynes Council ‘made’ the Ravenstone Neighbourhood Plan part of its Development Plan.

This followed the successful Referendum held on Thursday 2nd May 2019 with the question “Do you want Milton Keynes Council to use the Neighbourhood Plan for the Ravenstone Area to help it decide planning applications in the neighbourhood area?”

The result was declared by the Counting Officer on Friday 3rd May 2019:

The official declaration document can be found by clicking on the link:

A draft Neighbourhood Plan was launched on the 21st April 2018 which started the Regulation 14 pre-submission six week consultation period which ended on the 6th June 2018. Each household, statutory consultee and major landowner received a copy of the draft Plan together with a comments / feedback form with instructions for its completion. Comments received from residents, statutory consultees and landowners were carefully considered by the Steering Group and, where necessary, responses prepared for inclusion in the Consultation Statement. As a result a number of changes and additions were made to the draft Plan which became the version for submission to Milton Keynes Council on 20th July 2018.

Further information can be found by clicking on the link below:

Milton Keynes Council arranged for a Referendum on the Neighbourhood Plan for Thursday 2nd May 2019. 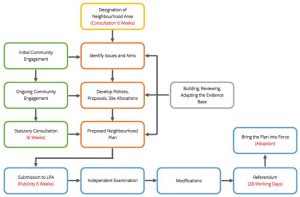